However, when he associates himself with Tyler (Brad Pitt) he is dragged into an underground fight club and soap making scheme. Together the two men spiral out of control and engage in competitive rivalry for love and power. When the narrator is exposed to the hidden agenda of Tyler’s fight club, he must accept the awful truth that Tyler may not be who he says he is.

Superb, and truly one of the greatest movies of all time.It starts with the screenplay. Adapted from, and very faithful to, an excellent book. The book by Chuck Palahniuk was perfect for a movie: vivid, powerful, challenging, original, unpredictable. Considering how perfectly formed the book already was, the screenplay would have been a doddle.

The direction is spot-on. Perfect cinematography, pacing, and editing. The twists and nuances of the book are captured perfectly.

Edward Norton and Brad Pitt are perfectly cast as the two lead characters and deliver in spades. Helena Bonham Carter is a strange selection to take on the role of Marla, as she tends to act in Shakespearean dramas and other period pieces. However, despite this, her performance is very convincing. 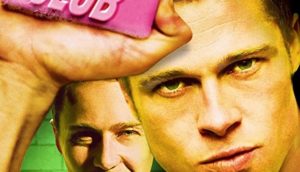